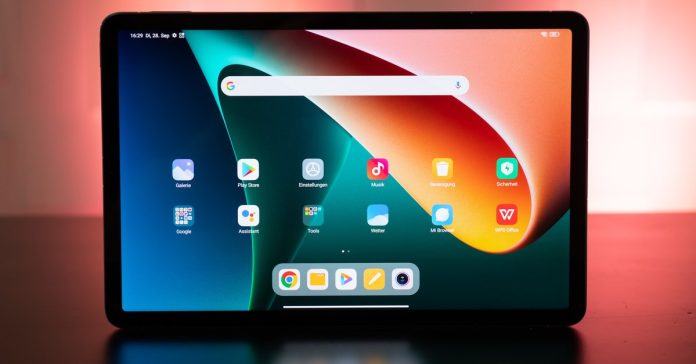 New Android tablet has it all

With the Xiaomi Pad 5, the Chinese company has caused a lot of enthusiasm in the tablet market. Now the successor is announced with the Xiaomi Pad 6 and it really has it all. Even Samsung and Apple can not keep up with the equipment everywhere.

The Xiaomi Pad 5 (for review) was located in the middle class in order to create a lot of interest with an attractive price. But with the Xiaomi Pad 6, the company wants to explore the limits and also offer real high-end models that can easily compete with Samsung’s and Apple’s best tablets. So Xiaomi wants to equip the best version with a Snapdragon 8+ Gen 1 and LTPO panel, which works at up to 120 Hz. This would significantly improve the performance of the tablet once again. In addition, the device should be equipped with allow up to 120 watts to be fully charged in just a few minutes. In this respect, Apple and Samsung cannot compete at all.

In addition to the high-end model, Xiaomi would like to continue to offer the Pad 6 in cheaper versions. This is how it should Be equipped with a MediaTek chip. In addition, this time there should also be a 5G variant, so that you can stay connected to the Internet on the tablet while on the go. There is no information about pen support yet. However, since the Xiaomi Pad 5 has supported a stylus and the competition also offers this support, it can be assumed that the Xiaomi Pad 6 can also be operated optionally with a stylus.

Why the Xiaomi Pad 5 is so interesting, you will learn in the video:

In addition to the Xiaomi Pad 6, the company is also planning a cheaper Redmi tablet. Just like the Redmi smartphones, this should be a cheaper modification with a slightly modified design of a Xiaomi tablet. So here Xiaomi could cover another price range, which is below the current Xiaomi Pad 5, which costs less than 400 euros (look at Amazon). Now that Google is betting on Android tablets again, Xiaomi wants to get in really big.

Live Music at Sea: How Margaritaville at Sea is Amping Up the Tunes

Music lovers can experience new levels of entertainment and find their groove while cruising...
Read more